Hi there! My name is Nikita, and I'm a JavaScript developer at Binary Studio. Today I would like to tell a story about my journey from a student to an Academy coach. I will try to share some Tips & Tricks for successful graduation from the Academy.

After returning from the army in 2015, I wanted to connect my life with IT. My first job in IT was SEO (Search Engine Optimization). I was engaged in the promotion of the site in search engines. After a while, I managed to grow from an intern to the head of the department. In that period, I met a lot of routine work that I knew could be easily optimized. Therefore, I began learning JavaScript to write simple scripts to automate work. This is my first code, which brought me a list of domains in the browser console from the link exchange.

I also made simple scripts with API requests. The code was not the best quality, yet most importantly, it worked and helped me speed up my work. After my attempts to automate work, I decided to change my profession. I took several simple online courses and tried to deepen my knowledge in JS. At the same time, my colleague entered the Binary Studio Academy. He spent most of his working time doing homework to meet deadlines. And one day, he left his job! As I learned later, the Final Project stage had begun, and he simply no longer had time to work and study simultaneously. When he graduated from the Academy, he said, "This was the best summer of my life." I was excited about his experience and decided to try my luck at the Academy.

My first attempt to enter the Academy was in 2019. At that time, I was sure I already knew many things and would pass the Academy test. And how upset I was when I saw this in my account. 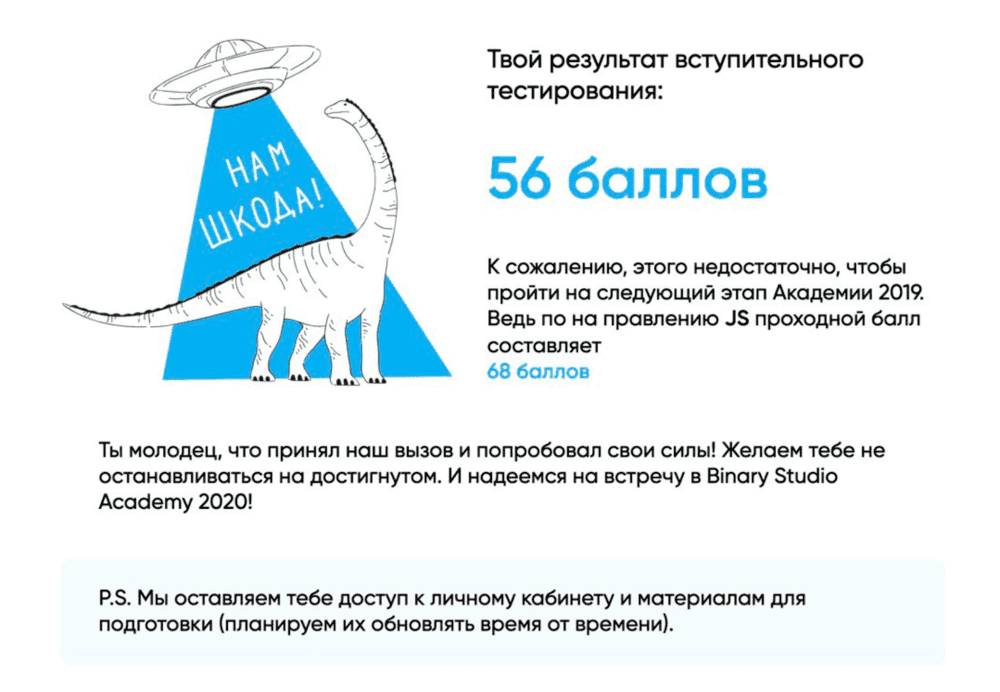 I was distraught, but I knew I wanted to try again. So I continued to work as an SEO optimizer and was preparing to enter the Academy 2020.

Spoiler alert: By the way, now you don't have to wait a whole year anymore, since we recently launched the Winter Academy.

2020, COVID has begun. At that time, Ukrainian businesses started to lose profit, and I was laid off from my job with a few more guys. I decided to squeeze the maximum out of this situation. I decided not to look for a new job but to prepare full-time for entering the Academy. And as you probably all guessed from the title of this article, for the second time, I did it. 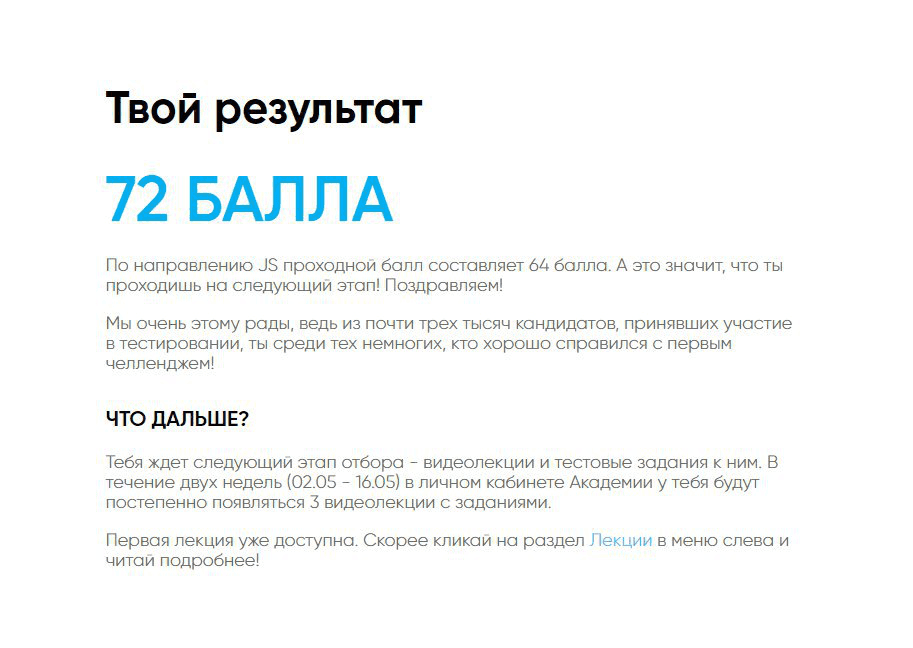 After passing the test, we were given access to lectures every 3-4 days to check how quickly we could learn new material. For the first time, I realized everything was serious, since before that, I had never written my server, and one of the homework was related to the back-end. I spent a lot of time learning the materials, watching the Academy lectures, and searching for additional information on Google. I had already begun to notice how responsibly everyone treats the Academy. For any question, even stupid, I always received a detailed answer. Therefore, if I got stuck on something, I knew they would help me. And with the help of all this, I passed the lectures.

The 2nd Qualification Step was not easy for me, and I thought it was even more difficult. But as it turns out, there is still room for improvement. We dealt with many technologies that a JS developer may need in his daily work. The most important thing I noted at this stage is that you should not do everything perfectly. To find the ideal solution to your problem, you could spend a lot of time, which was priceless, and in most cases, you simply did not have it.

Important fact: I spent 8-14 hours learning at this stage.

I also began to pay attention to the comments of the guys who reviewed my homework. Based on these comments, you can quickly figure out how to write better code. Previously, if my code worked, I did everything right. But after receiving detailed feedback for each completed homework, I realized that the code has to not only work but also be clearly written :)

After the lecture stage, the most exciting phase of the Academy began - the project. During the project development, we worked in a team, and there was a complete imitation of work on a real commercial project. At this stage, I wanted to learn as much as possible. Therefore, I tried to take on tasks I did not know how to do. With this approach, I figured out both our application's back and front parts. We have developed a data visualization app with support for MySQL, PostgreSQL, and MongoDB. 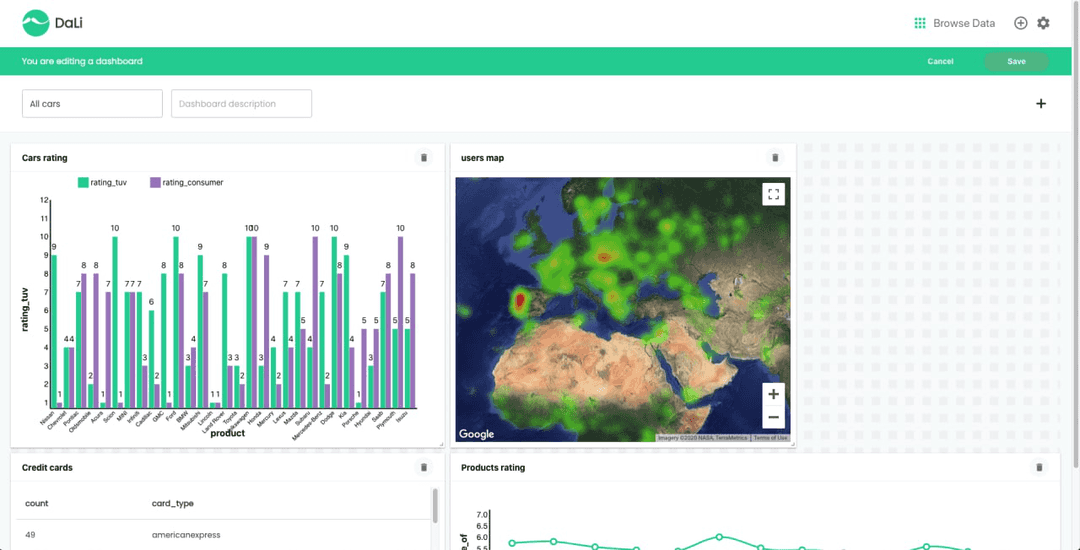 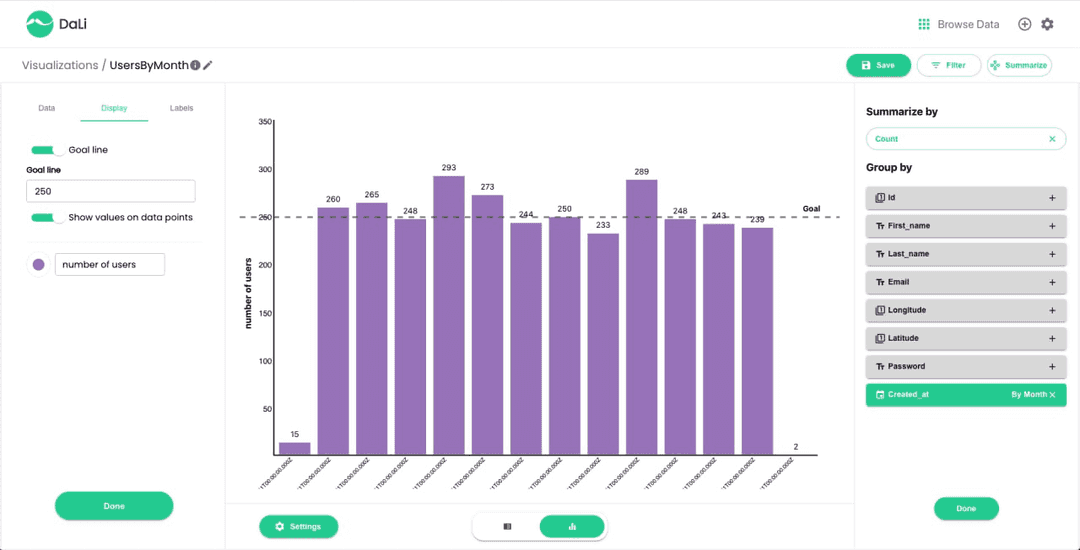 The most remarkable thing we did under our coaches' guidance was a good architecture that helped us expand our application. For instance, if we want to connect to another database, we need to specify the database config. We could do the same with chart types. Also, all the technologies we used were up to date, and the knowledge we received was relevant to the labor market.

During the project, I began to think that I wanted to be on the other side, not as a student of the Academy. Since I liked the processes and approaches to work and had never seen anything like this before. I discovered this is an excellent opportunity to gain additional skills and experience that will be useful in my career as a software engineer.

After six weeks of development, we finished our project, presented it, and had a fantastic time at the Academy graduation. We gathered with coaches and guys with whom we developed our web application. After graduation, I started applying for various open positions. Still, I hoped the Academy team would call me and give me a job offer, but this did not happen.

After the Academy, finding a job was relatively easy since the project we implemented was the most noteworthy item in my portfolio. I received the first job offer from the company during the first week of the job search. After sending my CV to three companies, two replied and called me for the interviews. I was preparing for a technical interview, but it lasted 5 minutes. The technical specialist looked at the project we developed at the Academy and said they were ready to hire me! That's how I got my first job offer as a software engineer, without a single technical question in the interview :)

I thought that at the first job there would be many new processes and things that would be new to me. But the first job was no different from studying at the Academy - we did the same tasks and had the same meetings.

The New Year holidays were already approaching, when the HR Manager from Binary Studio contacted me and offered me a job. It was the best New Year's gift, not counting the present from my wife :) So on February 1, 2021, I started my journey at Binary Studio and could already be part of Binary Studio no longer as a student.

During my job at Binary, I realized two things. First, basic technical skills are the most important! If you know the basics and fundamental concepts of the programming language, it is not a problem for you to switch to any JS framework and even learn another one. For example, it took me a week of learning to complete my first Vue task :) And secondly, if you want to know something well, you should teach it to someone else. Therefore, I did not think for a long time and joined the Academy team.

Now I can say Binary Studio Academy - is a perfect place not only for beginners in programming but also for the Binary Studio employees. In this entire system, each person learns and gains invaluable experience, which can be applied not only at work.

The first thing I did at the Academy was checking the students' homework. I tried to share my knowledge with the Academy's students and gained experience I didn't have before. On a commercial project, my Team Lead reviews my code. When I checked the homework, I reviewed the code of many students and thus tried myself in a new role.

Many people are involved in the Academy. Therefore, there is always a lot of work, and everyone can find something fascinating. One of those things was the coaching role at the Academy. I got to be in charge of the final project and direct it anywhere, using any technology. In addition to sharing knowledge with students, I improved my leadership skills and tested technologies I didn't have on a commercial project.

I hope my story helped you learn a little more about the Academy on both sides. Binary Studio Academy is an incredible opportunity for anyone interested in the IT industry. Most of the processes at the Academy repeat real processes on commercial projects and provide valuable experience. So, as you see, at 27, I switched my profession from SEO specialist and got my first job as a software engineer.

Good luck to everyone who will try their hand at the Academy, and we will meet during our studies. See you soon :)